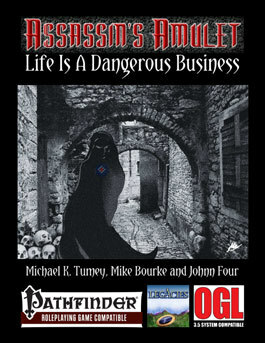 How to run the best assassin encounters in your life!

Before you run your next assassin encounter, read this book!

Assassins are a key part of fantasy. Done right, they bring mystery, danger, depth, excitement and drama. Mention the word assassin and your players’ hearts should skip a beat. And then your group should lean forward, all eyes on you, hanging on your every word because your game just got serious.

That’s the effect you want every single time.

Unfortunately, it never seems to work out that way. At their core, assassins are unfair. Who enjoys being on the wrong end of a One Shot Kill? And these NPCs then become your worst nightmare when a promising encounter you’ve designed breaks down into arguments and upset players. Assassins don't live up to their promise for exciting gameplay, and your game just never plays out the way it does in books and movies, does it?

Assassin’s Amulet solves your GMing problems. This thick book teaches you how to run amazing assassin encounters because it is packed with detailed how-to GM information and a ton of new gaming options.

Follow our advice, build assassins our way, run encounters like we teach you, and you get that Standing O!

I have 6 book cases of game books; another 6 crates of books, magazines and printed articles; and 52.9 GB of digital gaming products and GMing information collected since 1992. And nothing I’ve come across has ever revealed how to truly run awesome campaigns with assassins. -- Johnn Four

We took our lumps, but we learned the secret nobody else seems to know or want to tell you, and we put it at the core of Assassin’s Amulet to ensure you can quickly bring the full power of this plot device to your table.

I’ll give you a hint about what this secret GMing technique is right now (for the full details you’ll need to read the book): While everybody focuses on game crunch and encounters, you actually need to focus on the setting.

It seems simple or obvious, doesn’t it? But think about it for a moment. In Lord of the Rings, the ring is not just another magic item. It carries with it tons of history and massive stakes. When it appears in a scene, all this setting detail bears down on you. You have to turn the page to find out what happens next – you can’t stop yourself.

In any other book, the gold band would be just another magic item. Ho hum. But in LoTR, the ring excites you so much more because of its darkness and all that surrounds it. The armies, Sauron and his Eye, Saruman and Gandalf, Golum, , the hobbits…. It goes on and on. The setting turns the ring into something epic, and every encounter involving it instantly gets dramatic and thrilling.

So it is with assassins. In normal encounters with hired killers, the players usually only face an NPC with stats, equipment and tactics. Same old, same old. But with the right setting setup in place, the assassin becomes like the One Ring. The NPC carries such story and encounter weight your players’ hearts will skip a beat and you will have their full attention the entire encounter.

We also guide you through fun and dramatic world design so you can create your own impressive weight for your assassins to bring into every whispered rumor, shadowed alley and initiative roll.

What You Get in Assassin’s Amulet

Our book is a broad campaign setting with original adventuring locations, rules, feats, magic items and character classes. With something for everyone, players and GMs alike, you’ll never look at Assassins the same way again.

Assassin’s Amulet also takes a campaign toolbook approach, with assassins as a hook, that helps you with your GMing needs.

While it's impossible to list everything that's built into such a huge volume, here are some of the highlights:

A Complete Assassin Home Base.

What does an assassin HQ need?

Assassins are smart. They will use every resource to create a hidden base where they can rest, plan, train and run their operation from. Do not settle for some scattered rooms in the sewers or a vulnerable abandoned location on the wrong side of town.

Assassin’s Amulet gives you a home base of cunning design that you can drag and drop into your world or use as a launching point for your own design.

We strongly believe in tying story and setting together to create powerful encounters. The home base we’ve designed has this built-in plus a cool plot twist.

See what the Gold Standard of location concept looks like:

Select from the huge list of 126 plot hooks to design NPCs and plots at the same time.

Plus, embedded throughout the book is a secret organization we can’t mention here (because of plot spoilers) you can use right away as a backbone for:

This product offers you a ready-made epic mythos and institution to drop into your game setting to add new levels of detail to your world.

There is also a lengthy chapter on how to make epic legacy magic items that transcend history just like the One Ring.

These items are what your assassins and PCs can wield, protect, fight for and quest for. This immediately scales up your campaign’s scope to epic for you. Put your players in the middle and tell tale tales together.

Mike Bourke wrote this section solo and I cannot believe how well he fused magic item creation, storytelling and character gameplay into such an elegant system -- Johnn Four.

I know the word epic gets bandied about often, but his goal for this section was to bring the true meaning of the word to your game table through gameplay.

The Legacy Magic Items section helps you build more than just magic items. It shows you how to build history, integrated setting details, and huge scale consequences to having the item exist in your world.

If you are familiar with Relics from 1st Edition D&D, when artifacts were actually impressive items and not the meek constructs they are in today’s rules, then you have some understanding of what Mike brings you.

If you truly want to GM something epic, use the Legacies Magic Items chapter, which details:

How to Run Amazing Assassins

The extensive GM advice chapter covers all facets of running assassins as NPCs for thrilling encounters:

We end the book with a lot of crunch. Use this to inform your designs or just use it right away at the game table to save you prep time:

Campaign in a Box

This is the most comprehensive guide to Assassins ever in an RPG. Assassin’s Amulet gives you everything you need to run assassins immediately. The 300-page tome guides you through all the design steps needed to build something amazing your players will talk about for years to come.

Brought to you by veteran game writers and designers, Assassin’s Amulet is a toolbook designed to help make you an awesome GM.

And That's Not All!

We've also worked hard to generate tons of Bonus Content designed to make Assassin's Amulet user-friendly within your campaign, Maps designed to print and join together seamlessly. Player versions of the Legacy Items to keep secret the hidden plot twists that make these items both balanced and Epic. Player versions of the information on Cyrene, our original deity, again to keep the epic plot twists away from prying eyes. And more! And that's all free with your copy of Assassin's Amulet!

When you purchase Assassin’s Amulet you receive an instant download link.

We stand behind our work. You also receive our 60 day no questions asked Money Back Guarantee. If you are not 100% satisfied with Assassin’s Amulet, we will refund your money immediately without hoops or hassle.

See it in your library

View in Library
Sorry, this item is not available in your location.
Sold out, please go back and pick another option.

Your purchase was successful!

We charged your card and sent you a receipt

Good news! Since you already have a Gumroad account, it's also been added to your library.